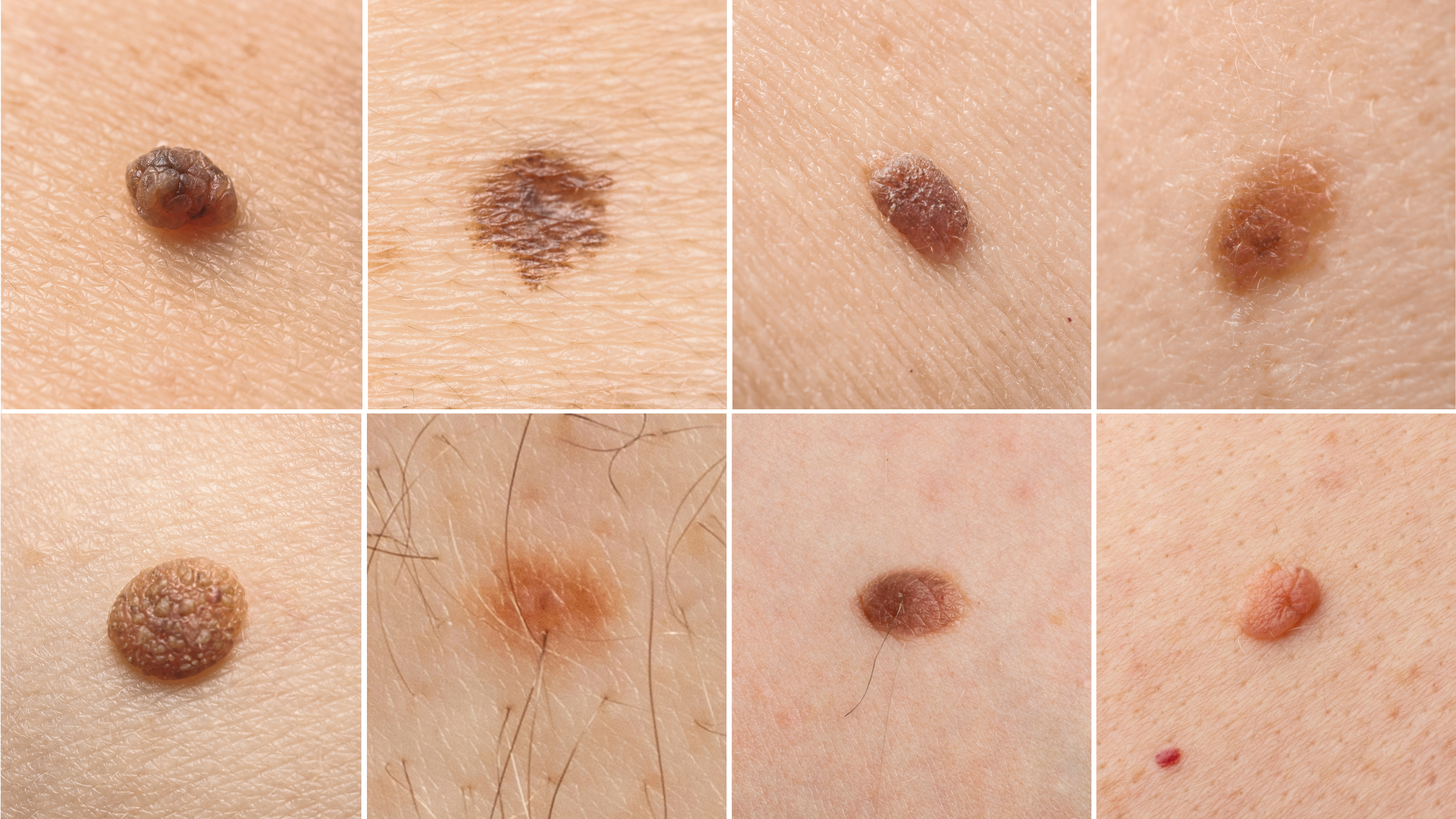 A mole (also known as a naevus) is a cluster of melanocytes, the cells which give the skin its colour. Moles come in many colours and shapes. People are sometimes alarmed when they notice a different-looking mole on their skin, but in most cases these moles pose no health risk.

Moles and freckles can be removed using several techniques, including radiofrequency surgery and broad band light IPL for minimal scarring.

What's the difference between a mole and a freckle? See our article Mole vs freckle to learn more...

Moles are categorised and described in many ways, based on:

Different types of moles are diagnosed and treated in different ways, but a common mole is harmless and doesn’t usually require treatment.

A congenital mole is present either at birth or appears in the first two years of life. These moles are often called birthmarks.

They can be the same size as other moles, but certain congenital naevi, known as giant moles, are more than 20cm in diameter. There is a risk of melanoma developing in giant naevi, so they should be closely monitored at regular skin checks.

A congenital mole may be all one colour or multiple colours. They may be hairy and occasionally have a “cobblestone” appearance.

New moles tend to appear on people’s skin spontaneously throughout their life, normally up to 40 years of age but sometimes later. These moles which appear in childhood and young adult life are known as acquired moles. In most cases they are genetically determined.

Sun exposure in childhood can promote their development in later life. These moles often fade or disappear after 50 years of age.

Most of the moles we refer to in the rest of this article are different types of acquired moles.

A Spitz naevus is often a slightly raised mole, varying in colour from red to dark brown or black. They appear most commonly in children and adolescents. These moles enlarge over a period of months (like a skin cancer),so they are often removed surgically to rule out melanoma.

A Reed naevus is a type of Spitz naevus with a dark colour and often appears to have fine lines or dots spreading from its centre. This type of mole is also frequently removed surgically because it may resemble a melanoma.

A blue mole is uniform in colour with no clear pattern. The colour is commonly blue, but can be grey, a dull brown or even cream in colour.

A blue naevus can sometimes be mistaken for skin cancer or melanoma due to its dark colour, but an experienced skin cancer doctor or dermatologist will usually be able to recognise a blue naevus by examining it using a dermoscope.

Halo naevi are moles with a surrounding area of white or pale skin. This area of white skin appears around a normal mole and usually persists for several years before gradually disappearing.

Some melanomas are surrounded by an irregular halo, so any new or changing halo naevus should be examined by a doctor.

A dermal or intradermal mole is raised and usually soft to the touch. Dermal naevi may be darker than or the same colour as the surrounding skin. It may have a smooth or rough surface.

Dermal moles are common on the face, especially around the nose. They are occasionally hairy, and some people consider them to be unsightly.

Dermal moles are frequently a nuisance since they can become inflamed or irritated by clothing, combs or razors.

This type of mole can be removed easily with relatively little scarring using radiofrequency surgery or shave excision.

A dysplastic mole, also known as an atypical mole or Clark naevus is often irregular in shape and pattern and may have multiple colours with a blurred border. It may look different from other moles elsewhere on the skin. These features are also seen in melanoma, so dysplastic moles are often surgically removed to rule out melanoma or other skin cancers.

Sometimes called an “age spot” or “liver spot”, a lentigo is a form of freckle (i.e. not a mole). It is caused by repeated sun exposure over many years. A lentigo is normally a harmless feature of ageing skin. Large or unsightly lentigines can usually be treated effectively using intense pulsed light or laser.

Normal lentigines may change colour, becoming darker and lighter according to sun exposure, but they do not tend to change in size or shape.

Lentigo maligna is a slow-growing form of melanoma which usually affects older people and is frequently seen on the face. Any facial freckle that seems to be growing or changing shape should be checked by a doctor.

Moles are clusters of melanocytes, which produce melanin, the pigment in skin.

Not all moles are cancerous

Most moles appear and remain on the skin for many years without changing significantly. It’s rare for a mole to develop into a cancer, although sometimes a cancer can develop within a pre-existing mole and sometimes a “mole” that seems to have grown or changed was in fact a skin cancer all along.

Common moles can have many different appearances: they can be small or large, dark or light, raised or flat. Harmless moles will often(but not always) have the following features:

A small percentage of moles is malignant

Some “moles” are actually skin cancers, and in a small number of cases might have the potential to later develop into a skin cancer.

The simplest way of identifying a malignant mole, or skin cancer, is the “ugly duckling rule”. If a mole looks different from all the other spots on the skin, it might not actually be a mole — it could in fact be a skin cancer.

Skin cancers can show up in multiple ways. They might have any of the following characteristics:

How can I know if my mole is cancerous?

Its difficult for a person without skin cancer training to know if a mole of concern is really a skin cancer.

The best way to know if a mole is cancerous is a check by a healthcare professional with experience in skin cancer.

Even if an individual mole of concern is not a skin cancer, it might be possible to have an undetected skin cancer on another part of the body. Skin cancer doctors and the Cancer Council Australia recommend regular self-checking for skin cancer.

In a skin cancer self-check, you study parts of the body in order, scanning the skin for “ugly duckling”, odd-looking or irregular moles.

For more information, see our How to check your own skin page.

If you aren’t confident that you can accurately assess your own moles, or you prefer to have your skin systematically examined, you can have your skin examined by a skin cancer doctor, general practitioner or nurse.

You can book a mole check or full skin check at Spot Check Clinic by: